A Slight Case Of Overbombing 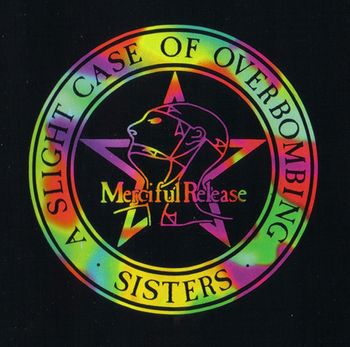 This compilation of The Sisters of Mercy's Greatest Hits was issued in 1993.


Temple Of Love with Ofra Haza on additional vocals.

Later in the year, in December 1993, the album release was followed by


an "Overbombing" Tour mainly of Germany but starting in Vienna, Austria


and ending with three gigs in the UK. 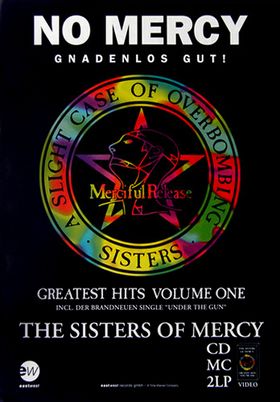 with the lyrics and one of the illustrations by Andrea White on the inner side.
The vinyls come in black inner sleeves.

includes all the information and pictures from the gatefold vinyl release
plus an additional Reptile House infopage.

Tracks are identical on all releases and spread over the double LP as follows.
The 2018 reissues are remastered versions, though, and differ slightly in track times (here in brackets):

All this information counts for all releases and is also mentioned somewhere within the artwork of most of them.

As vinyl records had lost their position as the ultimate means of music publication for the masses to the then most popular CD formats, only two releases on vinyl were
initially issued. In the course of a general reissue of Sisters releases by theWarner Music Group, a re-release appeared in 2018 accompanied by a free data download option
and/or as an data-only download, which is included here.