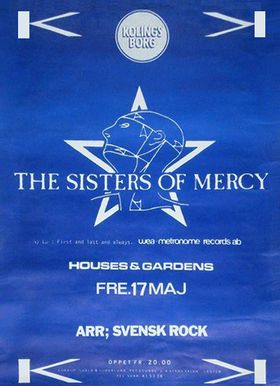 Concert Poster Kolingsborg, 17 Mai 1985
* Special thanks to the kind contributor of this picture

Most songs, The Sisters of Mercy performed during this gig, can be found on bootlegs like Opus Dei,


No Time To Cry and Wholy Ghost. A bootleg recording of the complete show was issued on CD in 1992


under the title Trans-Europe Excess. This very recording has meanwhile been used as the track for

An audience recording does exist as well and is in circulation among the fanbase...

There is a nice read about this gig and its circumstances, including more photos and 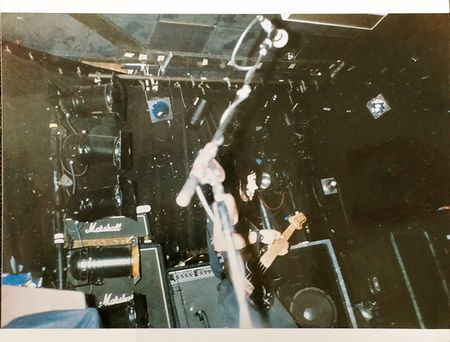 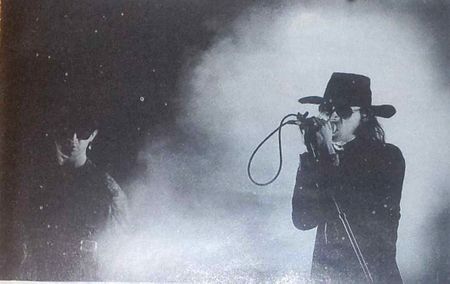 Our thanks for this one, including the translation of these excerpts, go to the kind contributor.

The Sisters Of Mercy are a dramatic act, their songs are black and dramatic. Their live shows are a drama. In the middle of the dry smoke and the monochrome lights stands Andrew Eldritch, a Clint Eastwood of Rock'n Roll. Black Dress, black hat, black shades and a face that is both, beautiful and at the same time worn. He moves like a villain out of a Spagetti Western.

The Sisters Of Mercy's aura and image is bombastic. Cold chills run down the spines of the audience. The Sisters' music does the same, at least in their very best moments, though if not so, in between, their songs sometimes tend to be dull. The 1980s are strange in one aspect. Never before have we learned to love the imagery as we do now. The Sisters are thorough in their imagery, they use every myth of rock'n roll as much as they can. On the other hand, The Sisters are quite serious, which makes them great.

The Sisters come from the coal-infested city of Leeds, and just as their collegues from the Gang of Four and the Three Johns, their music is as black and dusty as coal. Leeds is not the home of Glam, but the home of Industrial reality. The Sisters Of Mercy's lyrics and music reflect a Black Planet drifting into the hands of industrial magnates, presidents and red fascists. Andrew Eldritch's dark baritone voice is perfect to describe what The Sisters want to say. Eldritch turns the world into a big cinematic drama. Sometimes their music is like watching a nuclear explosion in a computer game. The apocalypse turns into an exciting drama, where's we are on the first row.

The Sisters rarely lose control. The three musicians and their drum machine retain perfect control. Only on two occasions they loosen up and, suddenly, their music becomes much more agressive. Marian, First And Last And Always and Walk Away are so perfectly performed that you shiver, even if you don't like the songs.