From SistersWiki.org - The Sisters Of Mercy Fan Wiki
Jump to: navigation, search
John Ashton on the production of Alice 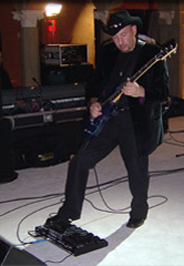 John Ashton is a guitarrist and an early member of The Psychedelic Furs, an English post-punk band mainly active from 1977 to 1991. The band is most famous for their song Pretty In Pink, which inspired the film of the same name written by John Hughes. In 1991, The Psychedelic Furs went on hiatus for almost a decade and reformed in 2000. Since 2001, they continue to tour around the world.

In 1982, John Ashton recorded various demos with The Sisters of Mercy such as the Portastudio Demos 1982 that were recorded at The Sisters headquarters and Eldritch home in Leeds. He was also involved in the production and recording of the Alice 7" and the Alice EP. The final recordings for the latter two took place at Kenny Giles Music Studio, Bridlington, East Yorkshire.

Some very basic information on John Ashton can be found at wikipedia. Apart from production and recording services for The Sisters of Mercy, John Ashton has also been involved with other bands like for example The Arctic Monkeys. In 2014, John Ashton implemented an all-star music project called satellite paradiso with an according album launched along Pledge Music. Extended (though incomplete) information about John Ashton's discography can be found at discogs.

In early 2021, John Ashton was diagnosed with Stage IV prostate cancer and a GoFundMe has been set up to help cover medical expenses.