was a storming gig in a sold-out house with the band in great mood.


The concert - thankfully - was recorded by several members of the audience.


The known recordings - as in circulation among the fanbase are listed here,


including various fanbase-produced coverart (see up and below) ...

All rights reserved. All wrongs reversed
Compiled by fans for fans. No copying
Subject by applicable laws
For promotional purposes only 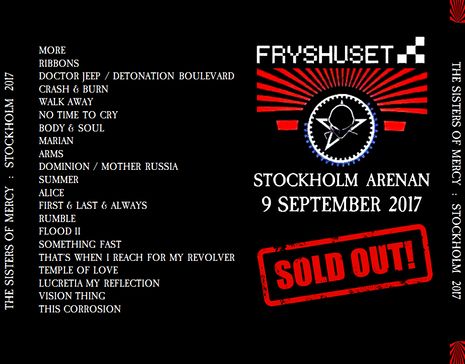 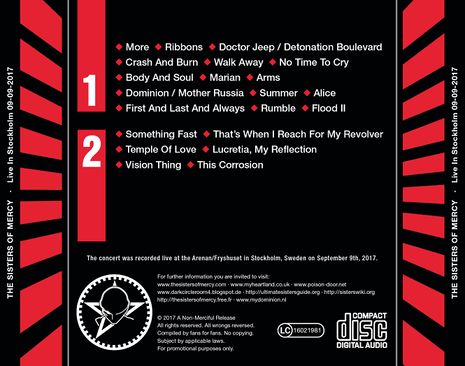 
OR MORE LIKELY:
** IT MIGHT ALSO BE SOMETHING HAPPENING DURING SONGS 16-21 THAT HAS TO DO WITH THE BATTERY-BOX **

(A.R.)
I think I was pretty close to Trekytt, you can hear the same person on both our recordings...

(Trekytt)
Great concert as always by SOM. Stand-out songs for me was "Walk Away", "Arms" and "Flood II". It was a miserable day with the rain coming down hard, perhaps fitting for a "Goth-concert" :-)

A lot of people standing in line waiting to get in. Sold-out, which according to the venues official site means around 3.500 people packed in "Arenan".

After 40 minutes waiting outside in the rain we finally got trough the entrance and up the stairs to the venue. It seemed that the concert started about 15 minutes late, as the band played on without any encore-breaks this evening. We also missed the support-band "The Membranes", but what to do?

As it was a Saturday-night most people seemed to be in a great mood.

Eldritch seemed to be in a great mood with "normal strange banter", and of course hard to tell what he was talking about ;-)

Otherwise a great concert, perhaps in retrospective with the concert back in 2011 in Stockholm, this one was more "audience-friendly" as it was less smoke and more "view of the band" this time around. The band seemed in good spirits and nailed the songs perfectly. Same setlist as in Gothenburg the day before.

- Please click into the picture for a larger view -