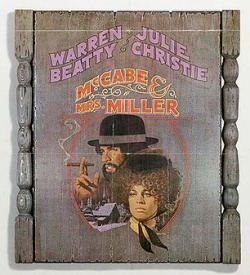 McCabe_&_Mrs._Miller - Ad for the movie

Wikipedia describes the film thus: "A gambler and a prostitute become business partners in a remote Old West mining town, and their enterprise thrives until a large corporation arrives on the scene." Some more information about can also be found on the back of the soundtrack single, see below

The movie soundtrack features three songs by Leonard Cohen, including "Sisters of Mercy", from which The Sisters got their name.

Andrew Eldritch referred to this film during an interview on German TV. You may find this here (in German) from about 5:30: http://www.youtube.com/watch?v=_96ZnZsjcWY

For some more comprehensive information about McCabe & Mrs Miller see:

All songs written and composed by Leonard Cohen. 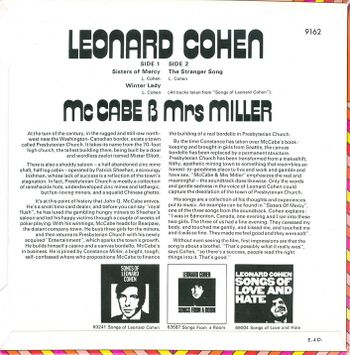 Yes you who must leave everything
that you cannot control
it begins with your family
but soon it comes round to your soul
Well, I've been where you're hanging
I think I can see how you're pinned When you're not feeling holy
your loneliness says that you've sinned