From SistersWiki.org - The Sisters Of Mercy Fan Wiki
Jump to: navigation, search
The Sisters of Mercy @TivoliVredenburg, Utrecht, 20 October 2019
- Complete gig with songs edited together

The final gig of the European leg of the National Treasure Tour
saw The Sisters of Mercy arrive in The Netherlands.


The Sisters had played Tivoli before, the last visit was in 2011 but this
was the first time at TivoliVredenburg which opened in 2014 and comprises
several venues. The Sisters of Mercy played at the Ronda.

Support act for the final time this tour: A.A.WILLIAMS


Alex also once again joined The Sisters of Mercy on stage as she had
done in Berlin, this time adding backing vocals to More, Something Fast
and This Corrosion.

The concert got recorded from the audience and is in circulation
among the fanbase. For some cover art and additional info see
also Utrecht 2019. For further discussions and reviews please
check this thread @The Heartland Forums. 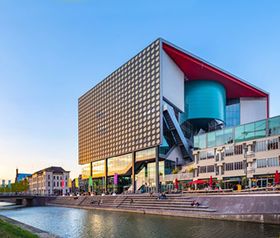 ● Ravey Davey - nurse to The Doktor

The Sisters of Mercy - Crash And Burn
TivoliVredenburg, Utrecht, 20 October 2019

Our thanks go to all the lovely and dedicated contributors


of all the wonderful and great videos here.

Check their channels and you might find more wonderful treasures.