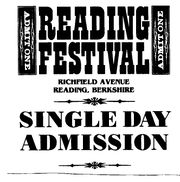 The Sisters of Mercy headlined the final day of this three-day festival.


On the day, MTV 120 Minutes presenter Dave Kendall managed to catch up


with Andrew Eldritch for a chat ... about festivals, about the recent US-Tour

However, this festival appearance became a landmark in Sisters History for the second encore, with Andrew Eldritch
returning to the stage after the break wearing a bombastic black shoulder pad and the band presenting a medley
of He's Got The Whole World In His Hands, Always Look On The Bright Side Of Life and 1969.

Recordings of The Sisters' performance are available on the bootlegs The Neon Dream and Brothers & Sisters,
both of which are incomplete and missing one or the other half of the gig.

In addition, a 7" bootleg single box was issued, see Live Reading 91 Box. The included picture disc does,
however, comprise only four of the tracks played here.

Fortunately, various audience shot films of the complete show do exist as well and were initially distributed
in VHS-Format, see SISTERS OF MERCY - Reading and The 1991 Reading Festival.

Only recently, he realised the wonderful Brothers And Sisters Reading 1991 Multicam Video DVD featuring
the full show on a DVD-bootleg. Thank you very much!!! 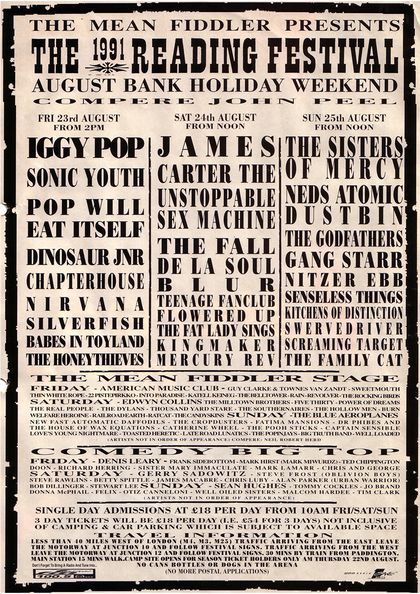