and soon after in the same year manufactured and distributed by some Australian bootleggers as part of a three-record set consisting of the first three singles.

The set was limited to 1,000 copies and offered the first three singles pressed on coloured vinyl.

Some months before the release of the three-singles-set, the present Damage Done record was, however, sold already as an individual "re-release" from the UK.
The covers of the UK issue and the Australian set-release differ slightly in tone (and print quality), so maybe the UK-release was a test charge to see how a re-issue
as such would sell. Meanwhile, ever more individual copies surface at prices often higher than the initial price for the whole set.

And, the label on side B of the vinyl is also a mere copy from the The Damage Done (single). 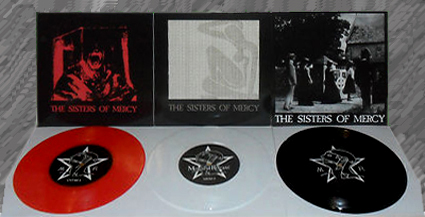