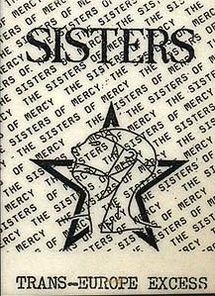 Part of the Trans-Europe Excess Tour in 1983

Various incomplete recordings from this concert do exist and are - compiled into one - in circulation among the fanbase.


The version of Temple Of Love played here made it onto the bootleg-CD Sister Ray. This one and six other songs
are also available on the 12" bootleg The Damage Is Done. And there is a bootleg cassette, which was long believed
to feature the full concert, see Jesus Loves The Sisters (cassette). Unfortunately, this recording is from the Hamburg
show the day before.

A quite enlightening and interesting read about the venue and The Sisters concert there with many pictures and further links
can be found at the ever informative blog I Was A Teenage Sisters of Mercy Fan under the entry TSOM with a different
singer! - Munster Odeon, 1st September 1983. Don't miss it!.

However, and thanks to spiggytapes, we have at least the two still
videos from the concert here, which are definitely from the gig ...