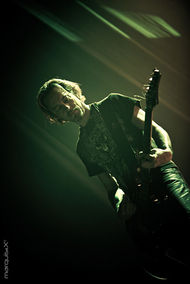 Tom Ashton on stage with The March Violets in November 2007

Guitarist with The March Violets and The Batfish Boys during 1981 to 1986,


Tom Ashton played guitars for the Sisters circa 1981 for a few live dates.


Rumour has it that Eldritch asked Tom to join The Sisters at this point. He didn't.

After the Violets' split Tom remained in the music industry, working on soundtracks for film and television,


see IMDb database for his works in that respect.


He also played guitar in a band called Hard Rain and then with Clan Of Xymox.

In 2007, Tom Ashton joined the re-united March Violets, who then produced the 5-track EP Love Will Kill You


as a pre-release to their recent first full album Made Glorious published with PledgeMusic in April 2013.

For everything about any releases he's been involed, see also his entry @Discogs


Some common old talk and some photos are also available in this thread@The Heartland Forums.