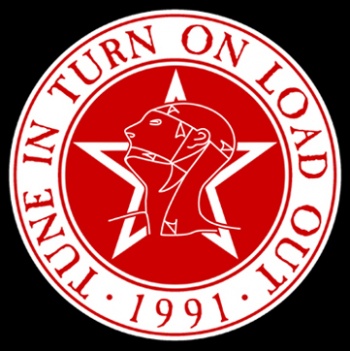 First show of Tune In - Turn On - Load Out


Other acts at the event included Public Enemy, Gang of Four and Warrior Soul.

A review of July 14, 1991 by Mark Carothe from the Chicago Tribune recalls:

[...] With the pavilion less than half full, the Sisters entered the barely lit stage amidst a barrage of fog that didn`t let up for the entire hour-long set. As light patterns provided various murky settings, lead singer Andrew Eldritch dramatically twisted his arms and legs and stalked the stage in slo-mo, often vanishing inside a cloud.

Eldritch`s deep growl of a voice, which resembles a groggy David Bowie, rumbled beneath a wash of searing guitars and the relentless pounding of Doktor Avalanche, the band`s drum machine. On songs like "Alice", the cyclical guitar riff and propulsive mechanical rhythms would drive you from beginning to end. On other songs, the same thing would happen.

The fog, synthetic thumping and self-absorbed posturing got to be a bit much. No wonder the highlight came when Doktor Avalanche went kaput in the middle of "Body and Soul", and Eldrich filled the repair time by singing an incredibly tortured a cappella version of Stevie Nicks and Tom Petty`s "Stop Draggin` My Heart Around".[...]

An audience recording from this show does exist and is in circulation among the fanbase.