An extraordinary specialty even in Polish Postcard Flexis are the splitted versions, one of which is presented here.


The present set of two flexi postcards with the Sisters song No Time To Cry shows some excerpts of an extremely detailled landscape painting by Benardo Bellotto of the Polish city of Warsaw as seen from the side of Prague at around 1770. The original of this veduta is part of the Benardo Bellotto Collection of the Zamek Królewski, the Royal Castle Museum in Warsaw. At the time of the creation of this picture, the Royal Castle was inhabited by the last King of Poland Stanisław II Augustus, a great collector of exquisite works of art, who had recruited Bellotto to work on the castle. One result was the original painting that later made its way into the Royal Castle Museum Collection. A black and white etching of this motive, made in 1772, can be found at the Polish National Museum in Warsaw.


At least one further such flexi postcard set featuring excerpts from the same veduta and the track Jolene covered by The Sisters of Mercy does exist, see Jolene (Split Landscape Postcard Flexis). The Sisters' song No Time To Cry can also be found on the No Time To Cry standard flexi version, some Polish Art Postcard Flexis and on a sound postcard showing the typical This Corrosion single motive. 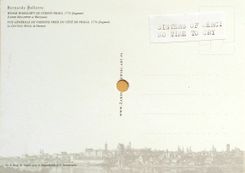 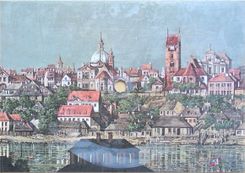 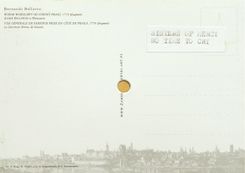 thus mostly including both parts of the full motive.
Not so here, however, as the two postcards together show only a fragment of the original picture.

the landscape prints on the lower parts do not consist of different excerpts from the original veduta.

NO TIME TO CRY
SISTERS OF MERCY

or in English:
View of Warsaw from the side of Prague, 1770 (fragment)
The ROYAL CASTLE in Warsaw

The creator of the original picture, Bernardo Bellotto (Canaletto the Younger), should not be mixed up with his uncle and teacher Giovanni Antonio Canal (Canaletto) who was the first to be known under the mononym "Canaletto" and named so because a) he was the son of the Italian painter Bernardo Canal, i.e. the "little Canal", and also due to the fact b) that his oeuvre - apart from various London scenes, where he lived for some years - consisted widely of vedute showing his birthtown Venice with its plenty canals. His nephew Bernardo Bellotto followed the footsteps of his uncle and also started using his name "Canaletto", though his work is focussed mainly on Rome, Dresden, Vienna and Warsaw.