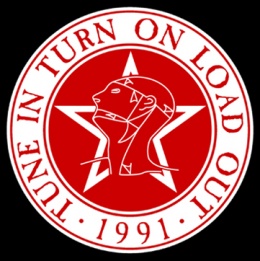 Other acts on this day included Gang of Four and Warrior Soul.


Although, this tour consisted of a five-band package, Public Enemy (and their support act Young Black Teenagers)


did not appear at Chene Park, because the City obstructed. For a few more details on these events, please check


the press article down below.

An audience recording from The Sisters performance is in circulation among the fanbase.


In 22 other cities, fans attending the "Tune In, Turn On, Burn Out: The Vision Thing Tour" will see and hear a heady bill that blends rock acts Sisters of Mercy, Gang of Four and Warrior Soul with the outspoken rap group Public Enemy. Detroit, however, is the only city where Public Enemy will not perform, a distinction that has angered tour participants and local ticket buyers for Saturday's concert at the Chene Park Music Theatre. Why the deletion? For starters, the city's, plans for Chene Park, according to the department of recreation's Ron Alpern, is to "attract adult and, in other cases, family audiences" to the picturesque riverside park. That excludes rap and hard rock acts, which tend to draw rowdier crowds. At least two of the other "Tune In" acts Sisters of Mercy and Warrior Soul are within the hard-rock realm and draw younger audiences. Alpern says this alternative rock crowd which comes downtown for shows at St. Andrew's Hall and the Latin Quarter is one the city wants to court for Chene Park. He calls Saturday's show "an experiment".

According to Mark Campana of Nederlander Productions, which books shows into Chene Park, Public Enemy was added to the package after the city had already approved the show. The city, according to Campana, considered the full package with Public Enemy but chose to keep the bill as it was. "It's a hot potato," says Campana. "They're struggling with how they're trying to posture (Chene Park) in the community." Alpern, meanwhile, says the city felt Public Enemy "would skew (the crowd) to a much younger audience" than the city wanted. "This is not a precise science here," Alpern adds. "We're doing the best we can. We're trying to see how this goes. We're hoping it's going to work, and if it does we can look at other things as they present themselves down the pike."