Ticket stub from the actual gig

Touring the UK a bit more extensively, The Sisters of Mercy were up to play this gig at Ceasar's in Bradford,


West Yorkshire, UK, on a lovely Sunday evening in 1982 not very far from Leeds.


They had hoped to be lucky enough to open the show for Nico & The Invisible Girls on that day.

For quite a while, this show was - wrongly - thought to have taken place a year earlier on a Saturday,


but thanks to our kind contributors, we can present the ticket stub from the actual concert here and have


- thanks to SpiggyTapes - corrected that error. 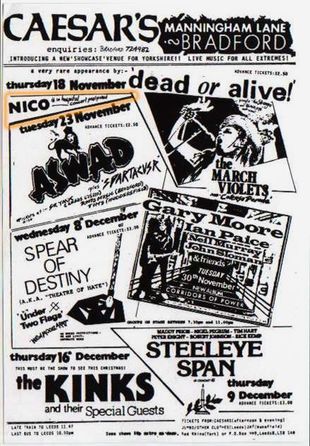 Flyer from Caesar's with "postponed" note

Some interesting information about this gig is also available under


in the Sisters fan blog I Was A Teenage Sisters of Mercy Fan.

However, this concert not not listed in The Sisters' Official Gigography for no reason.


has recently unveilled, and as the flyer from Caesar's here on the left side shows (see orange marks),


unfortunate for The Sisters of Mercy, Nico fell ill and was in hospital.

The concert had to be cancelled.

So far, a possible re-scheduled date for the gig could not be traced.


surroundings, including further pictures and links, is available at the


I Was A Teenage Sisters of Mercy Fan page