The advert logo of the venue

Logo of former incarnation of The Crypt 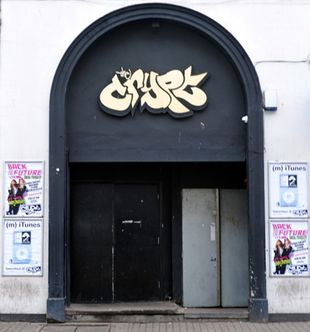 The Crypt on Havelock Road got closed in 2011.


There's hardly anything known about this concert and it is


not listed in The Sisters' Official Gigography.

The Crypt was temporarily called "Rumours Club" in the 1980s before it was renamed again some time in 1983.


It was located on Havelock Road in Hastings and closed down in February 2011 after more than 30 years,

During the BBC Radio Kid Jenson Show broadcast on 10 March 1983, which featured The Sisters of Mercy,


this concert and the following seven gigs were mentioned. A flyer or a concert poster - not to mention a recording -


had never surfaced until 2022, when an old annoucement poster found on social media made clear, that this concert


We strongly recommend you check the latter link for all the information around the actual gig, its circumstances


and more interesting links and stuff. Or you check the entry Sussex and drugs and rock'n'roll at the wonderful


I Was A Teenage Sisters Of Mercy Fan blog.