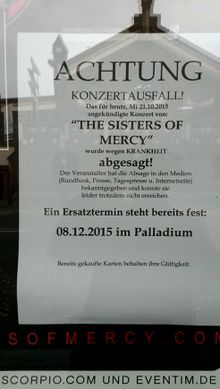 This was to be the first gig in Germany during The Sisters' UK&Europe October Tour 2015.


It was originally booked for the Live Music Hall, but sold out so fast, that the venue was changed to Palladium. Unfortunately, the concert had to be postponed to Tue, 08-Dec-2015 as various members of the band and the crew, including Andrew, Chris and Dave, fell ill. 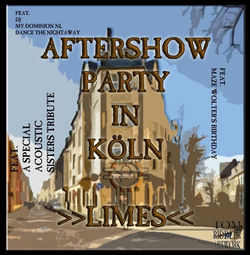 There was, however, a long-planned Aftershow Party in Cologne, which then started earlier and mitigated the effects of the sad news at least slightly and for at least some of the fans.

We are very sorry to announce that the remaining dates of our tour have been postponed due to an outbreak of viral laryngitis in the band. Köln Palladium has been rescheduled to Dec 8 and Berlin Columbiahalle will be on Dec 9. Tickets will still be valid for these shows. We are working on rescheduling the Athens show for next year. Huge apologies to all; especially those who have travelled from far afield. Andrew received a doctor's note this morning instructing him not to sing for at least 7 days. Chris and Dave are also suffering, along with several of the crew. We hate cancelling gigs; we hope that the rearranged shows will make up for it. So, to reiterate, tickets will be valid for the rescheduled shows, but if you need a refund, please see your ticket office. Sorry, all.