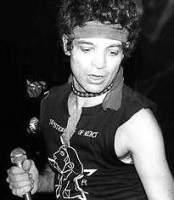 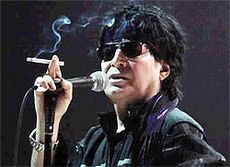 
Alan Vega's vocals were said to be influenced by Elvis Presley and Rockabilly.


Vega was born in Brooklyn, New York and began his career as a visual artist, gaining notoriety for his "light sculptures". Eventually he opened his own lower Manhattan gallery space, which he called The Project of Living Artists. The Project served as a stomping grounds for the likes of the New York Dolls, Television and Blondie, as well as the 15-piece jazz group Reverend B., which featured a musician named Martin Rev on electric piano. Soon, Vega and Rev formed Suicide, whose minimalist, aggressive music — a fusion of Rev's ominous, repetitive keyboards and Vega's rockabilly snarl — helped pave the way for the electronic artists of the future. Suicide disbanded in 1980, and both Vega and Rev undertook solo careers. Vega's self-titled 1980 debut and his 1981 album, Collision Drive, continued to explore the fractured rockabilly identity he had established in his earlier work. 1983's Saturn Strip, produced by longtime fan Ric Ocasek, marked Vega's debut for Elektra Records; but his relationship with them soured during production for 1985's Just a Million Dreams, and at one point the label even attempted to remove the singer from his own studio sessions.


For more information about Alan Vega's musical career see also his Discography @discogs and the page referring to him @wikipedia. We also recommend the entry Rock'n'roll Suicide - Eldritch and Vega in the well-known I Was A Teenage Sisters of Mercy Fan blog for a nicely informing article and some pretty photos from back in the days. A most enjoyable concert of Alan Vega from October 1983 that had Andrew Eldritch in the audience is available here on YouTube 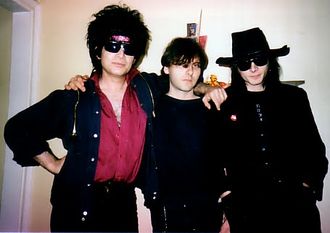 From early 1983 on, The Sisters of Mercy regularly covered the Suicide track Ghostrider - mostly within medleys with Sister Ray and/or Louie Louie, which was also performed during the final gig of the remaining band members of the First And Last And Always line-up at Royal Albert Hall.

The last time The Sisters of Mercy played Ghostrider was in another medley within their final encores on 26 January 1998 at Ancienne Belgique, Brussels, Belgium.

In 1986, Andrew Eldritch approached Alan Vega to collaborate with The Sisterhood on their album Gift,
where Vega featured as a virtual member of the The Chorus Of Vengeance, at the least.


In an interview with The Quietus in November 2011, Andrew Eldritch was asked about that issue as well:

Alan Vega is credited on the sleeve of Gift, but what was his actual involvement with the record?

AE: Andrew went back to Vega's apartment with a DAT recorder, played him the tracks and explained the scenario.
Andrew has a permanent visa to Planet Vega, because the two of them get on very well. Nobody else talks to Vega
like Eldritch talks to Vega.

For more information about developments around The Sisterhood project, see also The Sistershood @wikipedia.