Ghost Dance was a project started by Gary Marx after he left The Sisters Of Mercy during their tour to support the First And Last And Always album.


There is a lovely read here under Second and Last and Always – Part 1 that you shouldn't miss reading in the I Was A Teenage Sisters of Mercy Fan blog
on the first Ghost Dance releases and how they partly developed from initially Sisters-intended stuff. 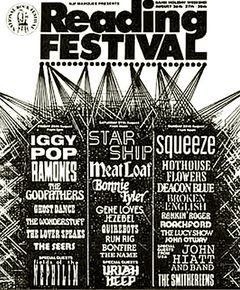 The band split up in 1989, after leaving the Karbon label, and moving to Chrysalis. With Chrysalis, they released the singles "Down To The Wire" and "Celebrate" before going with their full length album "Stop The World". After that the work on some more songs went on, but the band had "no real part in the Ghost Dance repertoire" and called it a day, just over four years after they began. They played their last gig on 4th December 1989 in Amsterdam.


On August 26th in summer 1988, Ghost Dance played @Reading Rock Festival. The very entertaining festival webpage created to commemorate the event (from where we have kindly extracted the advert here on the right side) does even note their setlist. We also have found some photos from that gig in our archives, please see down below ...

Some photos from the gig @Reading Rock 1988