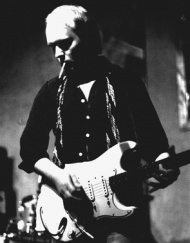 
on The Sisters of Mercy's album Vision Thing.


He played the slide guitars on Detonation Boulevard.

John Perry is orignally a founding member of the new-wave rock band The Only Ones,

For some further information on him,


In addition, there is a discography on John Perry at discogs...