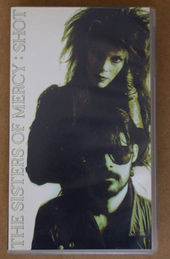 The Sisters' song Lucretia, My Reflection was first released in November 1987 on their second album Floodland,


called Lucretia on the album cover. The lyrics to this song can be found here.


The Lucretia, My Reflection single was released later on in June 1988.


The whole Floodland album was complemented by a video compilation titled Shot for which this video was taken.

A choice selection of stills