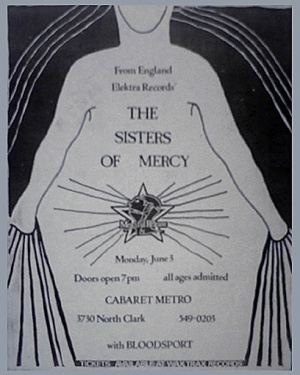 Remarkably, this show did not find an usual end,
but stopped more or less abruptly in the middle of Knockin' On Heaven's Door ...


Quote from the accompanying leaflet of the Silence Is Platinum bootleg:

Chicago was cut a bit short because a groupie jumped on stage and tried to tackle Andrew Eldritch.
He fell backwards under her weight but came around to knock her on her ass with the mic stand.
He stormed off stage to never return, the band relized a few seconds later that he was gone and left too.

An audience recording from this concert is in circulation among the fanbase,
which was finally pressed on vinyl as Chicago Cabaret Metro 3.June.1985.
And of course, the above mentioned occurences are clearly audible on these recording
as well and, thus, preserved for eternity ... ;-)) ...