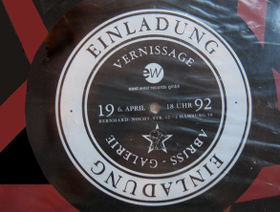 
on April 6th 1992 to a vernissage featuring the paintings of artist, screewriter and film director Armin Völckers


at Abriss-Galerie in Hamburg, Germany to promote the coming lauch of Some Girls Wander By Mistake.


in Hamburger Hafenstreet, an area that was squatted and destined for demolition at the time. The gallery was operated


of art and offered a space for a crossover of all sorts of arts ranging from Trash, Pop and Dada to High Culture and back. 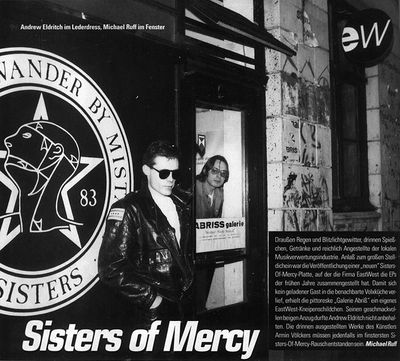 
about the location, the title of the coming album and The Sisters' logo printed on the labels.


For full information about this invitation promo, see:

Of course, German music press reported directly from the event, see the press cutting on the left.


The text (originally in German by Michael Ruff) says:

With rain and a flurry of camera flashes outside, large parts of the local (Hamburg) music biz convened inside Gallery Abriss for a big get-together for nibbles and drinks. They had come at the invitation of record company EastWest, who chose the place as their lauching party location for a "new" Sisters Of Mercy album. The album, in fact, is a compilation of EPs, the band had released in their early years. In order to prevent invitees from getting lost in the neighbouring Volxküche, picturesque "Gallery Abriß" even received their own little EastWest pub sign. Andrew Eldritch was, however, not allowed to wear his elegant beige suit. Anyway, the paintings of artist Armin Völckers exhibited inside the gallery must have been done in darkest Sisters-Of-Mercy excess ...

For more information about "Volxküche" we recommend you start here... (mostly in German, though)