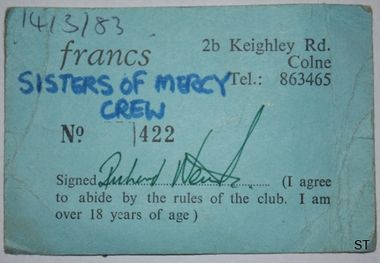 There's nothing known about this gig and it is not listed in The Sisters official gigography.
In all likeliyhood, there was NO concert of The Sisters of Mercy on this day.

Thorough and persistent research from the fanbase have revealed that in order to buy a ticket
and attend a concert with Francs, people would have to become a member of the club. Every visitor
of Francs' - and band members as well - would have to carry such a membership pass, which would
also serve as a ticket for the concert as soon as it was signed on arrival at the venue.


The membership card you see here on the right side has 14/3/83 as a date on it, maybe the day of
issue and sent to customers as such when they pre-ordered a ticket.


Anyway, these modalities could be the reason why for a long time people thought wrongly that
The Sisters of Mercy did play a concert at Francs on March 14th, 1983.

Fact is, however, that several then upcoming concerts of The Sisters of Mercy were mentioned publicly during the Kid Jenson Show on BBC Radio One, which was recorded on 6 March and first broadcast on 10 March 1983, including the one in Colne at Francs on March 26th.

The latter Sisters' concert in Colne did, btw, also get a mention in the incredible great interview Shine Like Thunder: The First Golden Age of The Sisters of Mercy
of August 30th, 2017 by Mark Andrews for The Quietus... a readable piece of Sisters History ... ;-)) ...

Unfortunately, no recordings from that gig have so far surfaced, either.