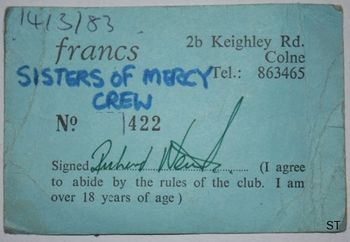 There is hardly anything known about this gig.


This show and several further gigs were, however, publicly announced in the BBC Radio One Kid Jenson Show,

Remarkably but not all that unusual, Francs demanded concertgoers to sign in for membership in order to enter the club.


They would then receive an according membership pass which also served as a ticket.


Bandmembers and crew would, of course, also need an according membership pass as such. Most likely, these were


ordered some time in advance and would therefore bear a different date, just like the one you see on the right side here.

This special question has not yet been conclusively resolved and is still under examination.

Any further information should be very welcome.