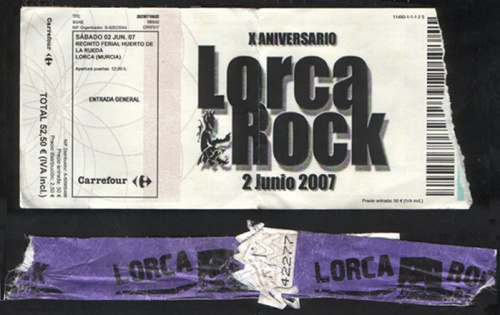 The first of the three gigs in Summer 2007 seeing allegedly ... another summer spoilt ...

Other bands performing at this festival were Marilyn Manson, Turbonegro, Ill Niño, Dark Tranquillity, Suicidal Tendencies, The Stranglers, Amorphis and many more.

A few photos and some short reviews from the festival in Spanish language, including on The Sisters, can be found on this website...

The below video featured The Sisters of Mercy live at Lorca Rock Festival, Murcia, Spain including a few stills and other extras. The songs are, however, not presented in the order they were played and the vidoe gives by no means the "full show". Beyond that, renditions of Crash And Burn and Alice at Teatro Tendastrisce, Rome, Italy, Ribbons @Trägårn, Gothenburg, Sweden, Alice at the Astoria in London, Crash And Buran from the free gig at Razzamatazz 1 in Barcelona, Ribbons at Studio, Krakow, Poland, all recorded during the Sisters Bite The Silver Bullet Tour in 2006, are included as well.


All this is followed by a TV performance of The Sisters of Mercy at the end of the video playing Under The Gun @German TV Channel ELF99 in the mid-1990s that starts with a few questions in German language to singer Andrew Eldritch ... total running time: 52:56
... all in all an entertaining thing that meanwhile, unfortunately, disappeared from YouTube...

Some reviews can be found here in this thread @The Heartland Forums.