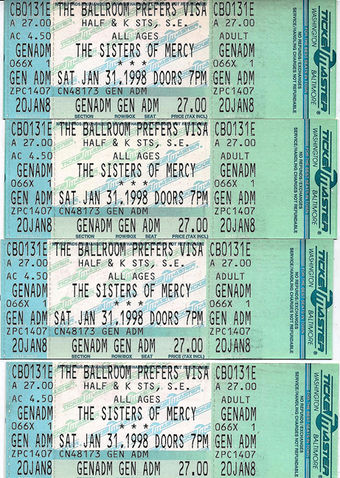 Gig No. 2 of the American leg of the Event Horizon Tour in 1998.
Scheduled support act were Heavy Water Factory.

However, due to some ear infection on Andrew's part, this concert was cancelled completely. In fact, The Sisters had already started to soundcheck when Andrew felt in need of a doctor, who then banned him from performing.

"As already reported, yesterday's DC concert was cancelled.
Mr Eldritch is suffering from a heavy cold and an inner ear condition
caused by flying with said cold. After struggling through the
New York gig, the Washington concert was cancelled on doctor's
orders. Eldritch has improved sufficiently for today's Toronto gig
to go ahead, though obviously he isn't 100% recovered as yet.


"No further cancellations are anticipated."

For further information, a little substitute entertainment and various
comments from the fanbase see SistersTours/19980131.