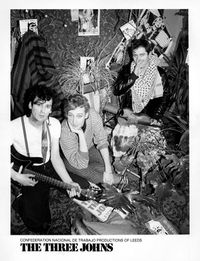 
augmented by a drum machine.

The band split up in late 1988, but reformed in 1990 and released an album before splitting again.


Langford continued with The Mekons, later releasing a solo album, while Hyatt concentrated on his academic career.

Jon Langford stepped in as a bass player with The Sisters of Mercy for a few live gigs in 1981.

For more information on The Three Johns, please avail yourselves of the according article @wikipedia ...


and check out their very own homepage The World Of The Workers Is Wild...