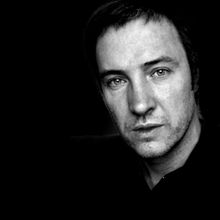 Tim Bricheno was the guitarist with All About Eve before he played with The Sisters of Mercy.


Remarkably, following the break-up of the original All About Eve line-up Bricheno briefly joined


The Mission’s touring line-up before being recruited by The Sisters of Mercy.


He joined during the recordings of their third album Vision Thing.

In 1993, Bricheno went on to form new band playing live as CNN,


Later on he formed Tin Star with the same singer to record another two albums to date.


for the Academy of Contemporary Music in Guildford.