In 2010, The Sisters played a superb summer tour of England, Belgium, Germany and Romania.
The first concert took place at The Assembly in Leamington Spa, Warwickshire, England.

This was the first time, The Sisterhood's song Rain From Heaven was performed live.
Various audience recordings of this show exist, among others Manna From Heaven.


For discussion and reviews @The Heartland Forums on this gig go to ...Leamington Spa


The complete concert can be watched at the YT playlist Leamington 2010. 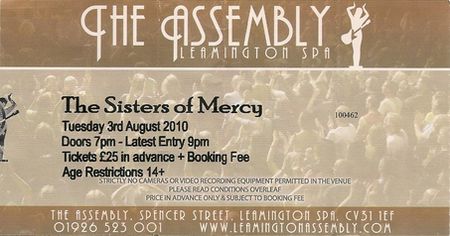