During their National Treasure Tour in 2019, The Sisters of Mercy had envisaged a concert at
Montevideo Music Box, their first gig ever in Uruguay, with The Secret Society as support act.

But it was not to be.


The concert got cancelled by the promotors Zona Rock.
Their official communication reads as follows (excerpt): 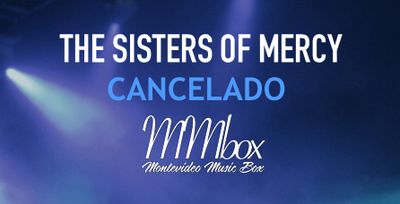 We regret to inform you that due to the low sales of advance tickets
for the Sisters of Mercy show, we decided to cancel it.


We did our best to promote it, but the sales have been practically zero and in view of new
payment commitments to the band, we prefer to cancel the show to avoid having a major
and unrecoverable loss.


We are grateful to all those who promoted this idea from the beginning and who bought
their ticket. We appreciate the willingness and endurance of all who support us. Thank you.

A full version of this statement can be found in the according Heartland Forums thread.


Only few days later, the local online music magazine Rockbizz reported, however,
that the concert was moved to Espaço Patrick Ribeiro, Vitória, Brazil.