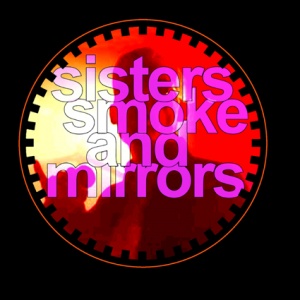 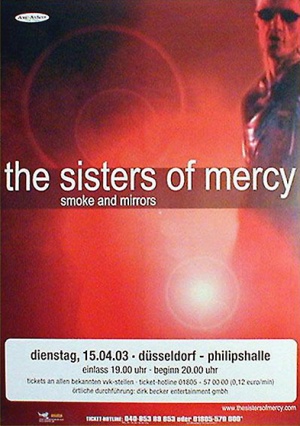 Part of the Smoke And Mirrors Tour 2003

For some quite bad reviews see sisterstours/Dusseldorf 2003.


Though, there have been other people as well. Here's a quote from an unknown heaven...

The venue was hardly sold out. Only a small crowd, no wonder, as The Sisters had headlined M'era Luna
Festival the year before and had played ten gigs all over Germany during Smoke And Mirrors of which this
one was the last.


Philipshalle was seated at the side rows as usual, but hell, the place was so empty while Sulpher were doing
the warm-up ... (not too bad, btw, and while crushing one's guitar at the end of one's slot is not always good
for a special effect, here it came quite in line with their perfomance. Good show!)

When The Sisters' intros started, the "crowd" gathered front stage ... The sound was ok in the first rows, but
Eldritch in no good mood, performing somewhat from the end of an unnecessary rope although in full capacity
of his expression and cohesion ... challenged obviously by some clear difficulties with the sound and leaving
with palpable unease into the break for the encores.


With the first encore, the concert changed completely and developed an absolutely stunning momentum,
which ultimately peaked in Vision Thing. A gig like a struggle from deep despondence back to full strengths.
Kudos to that.

An audience recording of this concert does exist and is in circulation among the fanbase.