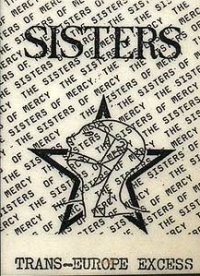 This concert took place during The Sisters of Mercy's Trans-Europe Excess Tour in 1983.


Various audience audio and video recordings of this show do exist and are in circulation among the fanbase.


Especially the videos can easily be found on YouTube as they represent one of the earliest concert footage of the band.


More recently, three songs from here were used as bonus tracks for the fanbase video Brixton 1983 Plus Bonus (DVD).

Bootlegs featuring this concert do exist as well. Temple Of Love, for example, can be found as the A-side of the 7" bootleg


ECHOES VOL. 1. The venue mentioned on that bootleg is, however, wrongly stated as the Metropol ...


The full concert appears on a bootleg-CD with the very similar title ECHOES VOL. I.


Record One of the three-vinyl bootleg box Through The Years features the complete gig as well.


Read more about this first gig ever, The Sisters of Mercy played in West Germany's then still enclaved city of West Berlin


in the entry ...then we take Berlin - August 1983 of the well-known I Was A Teenage Sisters of Mercy Fan blog,


which includes more info on the venue, the circumstances of the gig, some pretty photos ...