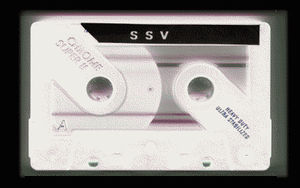 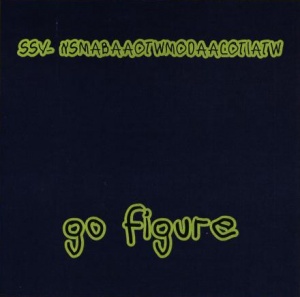 Go Figure is the name of the SSV album, and the title under which this album was to be released.


However, an official release has never come into real, although promotional copies of various formats or cassettes like this one and some according bootlegs like Feel No Pain Picture, a vinyl picture disc and the Screw Shareholder Value CD bootleg spread the produce around the world.


A very interesting and recommendable read about the intended original album release, including on the 3-track EastWest promo-CD, the according bootlegs and their sound quality as well as some further pictures can be found in the HEAVYLEATHERSEX blog's bootleg section under $crew $hareholder ¥alue : “Go Figure”.


Anyway, you might also want to read here, what The Sisters of Mercy's Official Site has to say about SSV, the Go Figure album and all the tedious circumstances around it some decades ago ...

As for the track list, the original artwork from the promo cassette (see left) suggests it as follows: 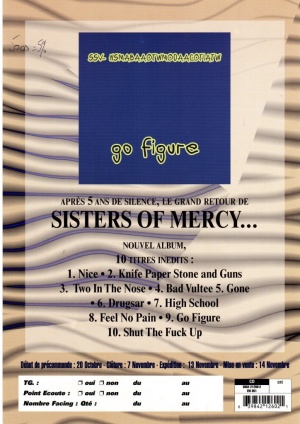 For an impression of how this release would sound, please check this channel/playlist


to the uploader of which we are most thankful.

Some say, that out of all these songs, High School fares the best, as the drums in all other songs were


cut out at the last minute. Most Sisters fans would not recommend buying this album,


although since it features Eldritch, many do listen to it, and some even like it perfectly.

As far as techno without drums goes, it's not a bad album, although the Sisters themselves recommend


you download the tracks rather than paying for a copy from eBay or another source.

It's said that WEA have remixed two of theses tracks. Though they have not surfaced yet,