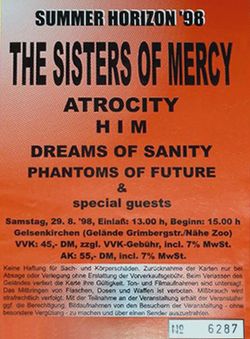 An Instumental written by Andrew Eldritch some time in the 1990ies.


Alledgedly is was played once live before The Sisters of Mercy's festival performance at the Summer Horizon Festival in Gelsenkirchen 1998, see also Sat, 29-Aug-1998. The track got, however, never released, and no recording of it is known to exist.


Here's a statement about it from Andrew Eldritch in UTR XIV, Winter 1995.

I see no reason why the resolution of any section should not be emotionally-mixed. Songs shoud be able to do that when required, at any single moment. Without a line which runs "Hey baby, I've got mixed emotions, and this is what they're called..." A mixed emotion can be a very coherent feeling, and one of my goals is to reflect that coherence.

Not many lyricists can do it. Few lyricists make the attempt (no wonder, when the usual way of looking at songs is so one-dimensional). In theory, you can do it with just a single chord. I've written a song called "New World Order" which does it, but "New World Order" is a saxophone solo wihch takes ten minutes to convey one mixed emotion, and not sequentially either.

It's one of the best things I've ever written, but you can prepare yor complaints now: I shouldn't need to use a saxophone, and I really shouldn't be selling out to the huge market for ten-minute saxophone solos. I knew it was wrong, but I couldn't resist, and I'll be very grateful to you for pointing out the error of my ways... Rest assured that "New World Order" is yet another of those things which will probably not be coming out as a Sisters record.