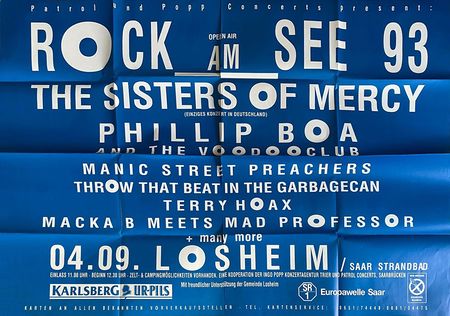 
Headliners: The Sisters of Mercy

Allegedly the "Only Concert In Germany" by The Sisters of Mercy that year.


However, December 1993 saw The Sisters play their Germany-wide Overbombing Tour


starting with a widely bootlegged concert in Vienna, Austria and ending in three UK-shows


in London (2) and Birmingham.

Other acts on the Rock Am See bill were Phillip Boa, Manic Street Preachers,

The Sisters' guitarist Andreas Bruhn was meant to present his act Broon here as well.


"Perhaps", as it said on the announcements on the festival grounds. They did, however,


not appear. An extended review of this festival can be found here.

Audience recordings and a video of The Sisters show exist and are in circulation among the fanbase.