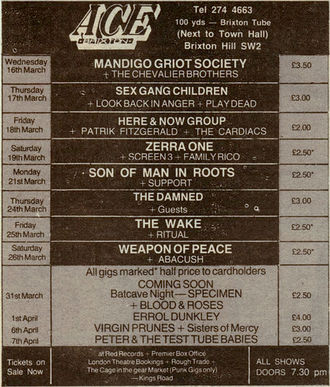 
play Brixton Ace on this day.


The acts performing here on March 17, 1983 included the Sex Gang Children, Look Back In Anger and Play Dead.


As you can see in the picture on the right, the evening was announced in the papers, with no mention, whatsoever, that


The Sisters of Mercy could possibly also be part of the event.


In the lower part of that annoucement, there is a concert of the Virgin Prunes + The Sisters of Mercy listed for April 6th, 1983.


that a Sisters concert on this day had formed the basis for various bootlegs like Halloween In Arkham or Carmina Burana.


That assumption is wrong; the source for those bootlegs is another gig of The Sisters at Brixton Ace in February 1983.

As The Sisters of Mercy did NOT play here on that day, there is - as a matter of logical consequence - no setlist, either. 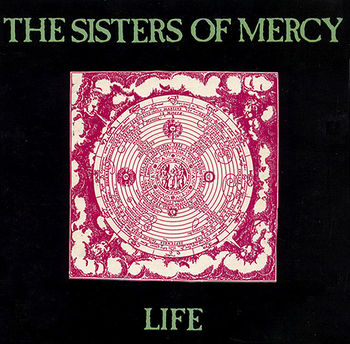 LIFE - a fan-produced book on The Sisters of Mercy

Additional Remarks On "The Setlist"

The Italian LIFE fan-book issued in 1988 and widely perceived as quite inaccurate did, however, give the below setlist.

This list is a complete fake and was simply copied from the Halloween In Arkham bootleg without further comment, which led to
decade-long rumour and discussion. Anyway, that book was by far not the only source of irritation, since plenty other producers
of discographies, gigographies, fanzines, bootlegs and, not at last, trading cassettes at the time built their products on rumour
rather than on information and gave way to a good amount of "creativity" in making up setlists, sources and tapes.


The first part (tracks 1-6) of the above fake setlist is actually the setlist of the concert at Brixton Ace on February 19th, 1983,
while the second part (tracks 7-11) is from the John Peel Session at BBC Radio One on 11.7.1984, except for Jolene, which
is most likely from the Kid Jensen Show in March 1983 at BBC Radio One.