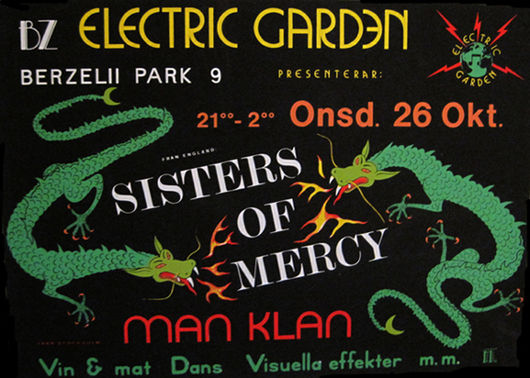 Electric Garden was the title of a series of concerts organised by Swedish promoters with international bands at varying venues in and around Stockholm.

Shortly before this gig, Ben Gunn had left The Sisters. Andrew, Gary and Craig did the concert as only three. Rumour has it that The Sisters even appeared at the gig with no instruments and no doctor. Instead, they borrowed the instruments of Man Klan and had The Doctor run from tape for the night.


A good part of this concert, and in good sound quality, can be found on a vinyl bootleg also titled Electric Garden.


Nonetheless, it was debated for some time whether the concert had taken place at all as it is not listed in The Sisters of Mercy's Official Gigography - until the announcements on the right was found in the website archives of Electric Garden.


For more information about this concert and its circumstances with many more pictures and details, we recommend you treat yourself to the wonderful I Was A Teenage Sisters of Mercy Fan Blog under (Body) Electric Garden - Stockholm October 1983. 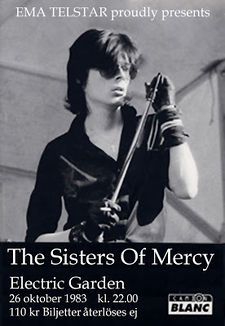 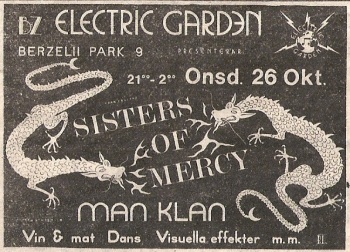 *** NOTE:
The imaginary announcement here on the left was created around 2005 by a fanciful Sisters-addict who abused the front cover of


The underlying photo is one of Phillipe Carly's famous Sisters Live Photos.