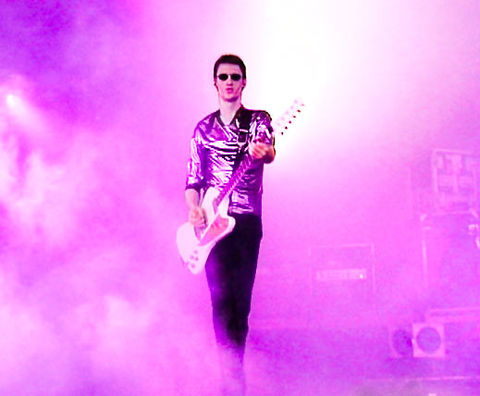 Adam Pearson live on stage with The Sisters of Mercy
most likely during a performance of We Are The Same, Susanne

Adam Pearson was in the Leeds band 3000 Revs, who had toured Europe with

Soon afterwards, the band split up over musical and personal differences; Adam went on


to form the bands "Hearts On Fire" and "Loose" in Leeds, as well as playing and touring


with the late Johnny Thunders and Red Lorry Yellow Lorry.

In early 1993, he was persuaded by workers at The Reptile House to submit a demo tape


to Andrew Eldritch, who was impressed enough to give him a job as Sisters guitarist


and bassist alongside Andreas Bruhn.

Adam Pearson's recording debut with The Sisters of Mercy was on Under The Gun.


His first live appearance with the band was on 10 July 1993 at Leysin Rock Festival.


after the 2005 tour to become a member of the legendary MC5.

During his time with The Sisters of Mercy, Adam Pearson wrote the music


to a number of unreleased songs, such as:

There is a discography of Adam Pearson @discogs...