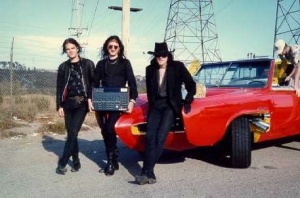 
Wayne Hussey and Craig Adams are asleep in the car for most of the video,


and there's no sign of Gary Marx at all, since he had left the band shortly before the shooting of the video.


A choice selection of stills

The Sisters of Mercy - Black Planet'