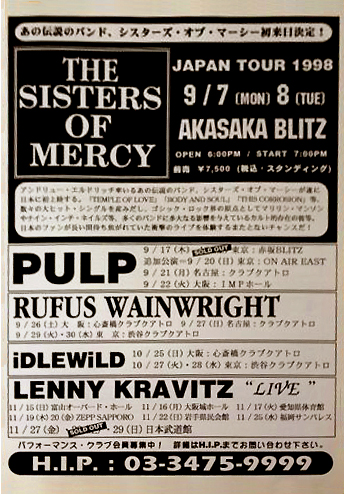 Newspaper Announcement for the Japan gigs in 1998

This show was meant to be part of The Sisters' Summer 1998 touring events.


and was the second attempt of The Sisters of Mercy to play Japan ...

Unfortunately, the concerts for this day and the following had to be cancelled.


Rumours had it that the promoter was billing the band in their 1985 line-up and not aware of The Split...


In fact, however, ticket presales were so low, that the whole thing was cancelled.

Anyway, The Sisters of Mercy did come to Japan finally, for their


and played at Fuji Rock 2011 Festival in Naeba Ski Resort.