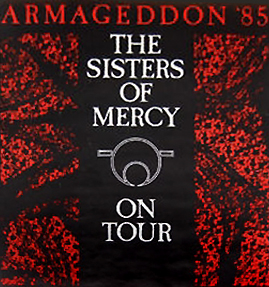 During the final Armageddon Tour of the remaining members of the First And Last And Always line-up between the shows
at Paradiso, Amsterdam, NL and Zeche, Bochum, West Germany, The Sisters of Mercy visisted Bavaria Film Studios
for the recording of their first TV-appearance on German TV with TV music magazin Formel Eins.

Two years ago four young men from England decided that psychedelic rock should not have died, actually. So what did they do? They bought black clothes and a few black sunglasses and formed The Sisters of Mercy. Musics and lyrics to all songs so far have been written and produced by singer Andrew Eldritch. Here are Sisters of Mercy with "No Time To Cry"...

... most of which is of course wrong.