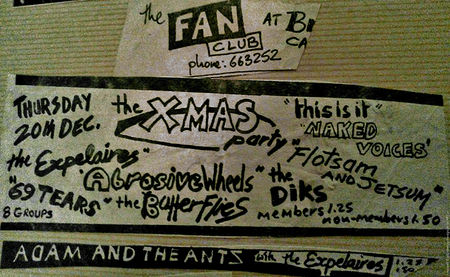 Before he met Andrew Eldritch and the two of them decided to form The Sisters of Mercy
(in order to have their songs played on the radio) Gary Marx was the singer and lyricist
of the band Naked Voices based in Wakefield near Leeds.

The Naked Voices played a few gigs during the later 1970ies. As the snippets of the
announcement on the right suggest, one of these gigs took place at Brannigan's Fan Club
XMas Party (F-Club) on 20 December 1979, where they shared the stage with other local
acts such as the Expelaires, the Abrasive Wheels and a few more.

NOTE:  The Naked Voices should not be confused with the band Naked Voice,
which featured a certain Guthrie Handley on vocals and released an album under the
title Forgotten Frontiers in 1986. The track Where Was? on that album is credited to
Wayne Hussey on guitars and for co-writing (the latter of which Hussey himself admitted
to be somewhat exaggerated). The track was later also released as 7" and 12" single.


Most likely, it was the combination of facts, that the band names were so very similar and
that in both cases former or later members, resp., of The Sisters of Mercy were involved,
which has lead to decade-long confusion among the fanbase (and elsewhere, obviously),
until that myth was clarified by Alex Daniele in his book about The Mission titled
At War With The Gods. For some more detail about Naked Voice and how it all came
see also this post @The Heartland Forums Sisters Chat... 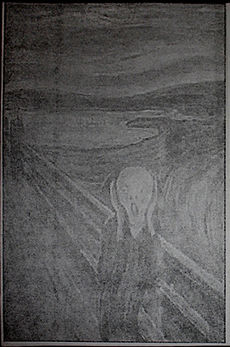 In June 1979, the Naked Voices produced a small number of demo-tapes


For their cover art, Naked Voices chose some b/w copy of the oil-tempera-pastel on cardboard version of 1893


of the famous painting The Scream by Norwegian Expressionist Edward Munch. A fact, which is especially


remarkable as Munch created four paintings and pastel drawings plus a variety of lithographies of The Scream.


That rings a bell of The Sisters of Mercy's second single Body Electric, where a painting was chosen for the cover


art, which also formed part of a series done by the artist.


However, decades later two of these cassettes would surface in online auctions,


accompanied by some blue A4 paper sheets with the complete lyrics, see the pictures down below ...


It is not known, though, whether these lyrics were attached to the original demo cassettes as well.

*** According to confirmed information, drummer Martin Taylor is NOT a relative of a certain Andrew Taylor.