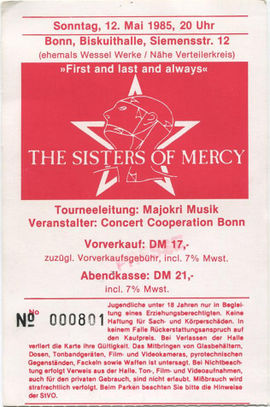 Part of the final Armageddon Tour of the First And Last And Always line-up of The Sisters of Mercy in 1985.


This was the one and only concert, The Sisters of Mercy played in the West German capital of Bonn.


They did return, however, for another gig at Museumsmeile OpenAir Festival in 2001,


long after German reunification, the capital of which was Berlin by then.

An audience recording from this concert does exist and is in circulation among the fanbase.