This gig was meant to be the first UK concert and the first of two gigs at Rock City, Nottingham,


during The Sisters of Mercy's Sisters Trip The Light Fantastic Tour in 2000. 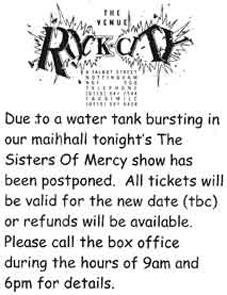 Unfortunately, Rock City encountered an unforeseen damage to one of their water tanks


and thus were forced to cancel The Sisters' gig.


all of the audience in good time. Therefore, some only realised the cancellation when


they found the according note on the doors (see here on the left side).

The second concert at Rock City that year on 3 September 2000 was not affected.


The tickets for the cancelled gig remained valid, however, and the concert was


For some additional interesting information on the developments of events, please check SistersTours/30/08/2000...