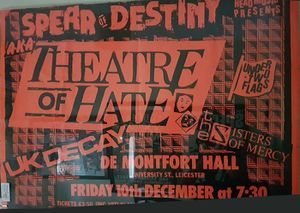 Only recently appeared this concert poster for the above mentioned gig.


The Sisters of Mercy opening together with contemporaries UK Decay and Under Two Flags for the Theatre Of Hate, who interestingly were announcing themselves already as Spear of Destiny, although that band would be the follow-up of Theatre of Hate only from 1983 onwards officially (for some time) ...


Anyway, unfortunately the concert was cancelled for unknown reasons. But you can read a lot more about the detection of and the research around this gig in the blog I Was A Teenage Sisters of Mercy Fan under the entry Theatre of Hat - Leicester, December 1982.