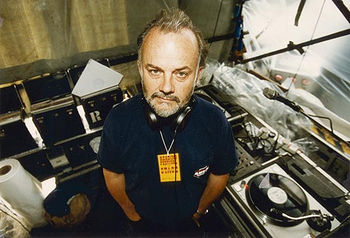 
known professionally as John Peel, was a British disc jockey and radio presenter.


the only one remaining on Radio 1. Known for the extraordinary range of his taste in music


and the occasional mistakes (such as playing records at the wrong speed) that marked his shows,


John Peel was one of the most popular and respected DJs in the United Kingdom. His influence


on alternative rock, pop, and dance music is widely acknowledged as being incalculably large.

For more extended information on John Peel, please see Wikipedia... and - above all -


the wonderful John Peel Wiki steadily extended by his wide and dedicated fanbase!

John Peel and The Sisters of Mercy

The Sisters swear that John Peel played The Damage Done single twice, which was confirmed through the dedicated research of the John Peel Wiki.


However, broadcast was not the title track The Damage Done but the main single b-side track Watch. Read more about these occurrences in the lovely blog


I Was A Teenage Sisters of Mercy Fan under Sisters Mysteries V – did Peel play Damage Done? as well as in this thread at The Heartland Forums.

Here is a list of all Sisters tracks ever known to have been aired by John Peel as retrieved from the John Peel Wiki in February 2017.


We strongly recommend you check that lovely page to find more information on the individual broadcasts and their full content.


Thanks to Dan Ishikawa who researched and made the file and to Phil Verne who originally posted this file online, a compilation of all


these tracks is also in circulation among the fanbase. Thanks to reverend some coverart is available under John Peel Shows 1980-85.

(JP: "It does, I think, rather lack the vitality of their previous work.")