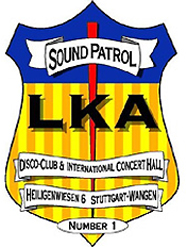 Gig no.2 of the third row of shows in Germany during the Sisters 2017 Tour.


The Membranes opened the show for The Sisters of Mercy again as during most of the continental part of the tour.

It was the second time that The Sisters of Mercy played a concert here. The LKA (full name: Longhorn-Kultur-Austausch / engl.: Longhorn Cultural Exchange) was originally founded in March 1984. The name LKA is also a pun on the far more common meaning of this abbreviation for the Landeskriminalamt (State Criminal Police Office) that exists in most German federal states, which is also reflected in the venue's logo.


Like on the day before, Lisa Cuthbert joined The Sisters of Mercy on additional vocals for the encores.

Please check the according thread @myheartland.co.uk for possibly upcoming reviews - though chances are low.


Anyway, this concert was recorded from the audience and is in circulation among the fanbase, see also Live In Stuttgart 18-09-2017.


A full-show video does exist as well, see this link. 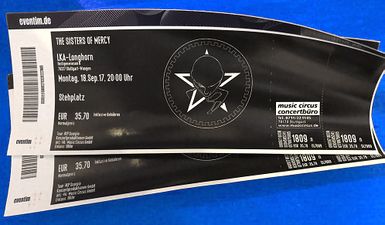 Encores
●  That's When I Reach For My Revolver - cover from Mission of Burma - feat. Lisa Cuthbert


Our thanks go to all the original uploaders of the cool videos here.


Check their channels on YouTube and you will definitely find more great treasures...