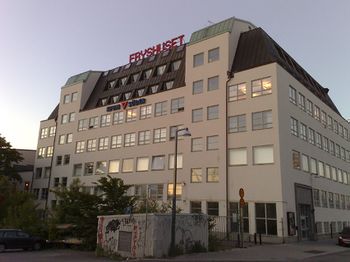 After a joyful gig at Trädgår'n - Gothenburg the day before, this was the second of three long-awaited concerts
in Sweden for The Sisters of Mercy during their 2017 Tour. Opening act for all Swedish nights: The Membranes

The venue itself has, btw, a long tradition as a youth and education centre and is present in several
Swedish cities and, since 2015, in Danmark as well, see Fryshuset – A Vision in Reality.

However, as people were still queueing outside Fryshuset, The Sisters' stagetime was delayed,
which caused them to perform their concert without the usual breaks between encores.

For reviews from the gig and everything please check in @The Heartland Forums.


An audience recording from this concert does exist and is in circulation among the fanbase,
See also Live In Stockholm 09-09-2017.

Ravey Davey - nurse to The Doktor

Many, many thanks go to all the


dedicated contributors of all the


Check their channels and you will definitely