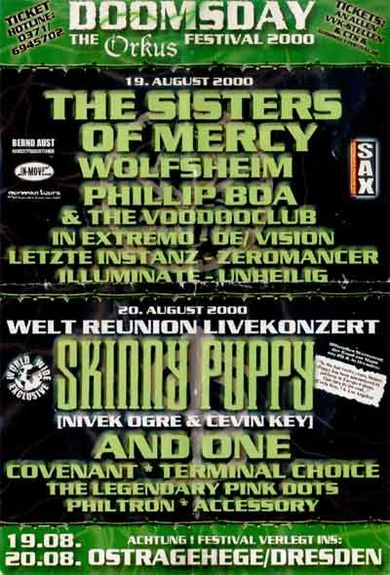 Part of The Sisters of Mercy's Trip The Light Fantastic Tour in 2000.


The Sisters of Mercy headlined Day One of this two-day festival, see Doomsday Festival @wikipedia.en. On the occasion of this concert, The Sisters of Mercy played a gorgeous version of Romeo Down, which is featured in here ... or further down on the right side


Headliners on Day Two were Skinny Puppy for whom it was the first live performance since 1992. A few pictures from The Sisters performance can be found in Doomsday Festival's Photo Gallery as well as at Virtual Night Angel, who also give two reviews of the gig. For more reviews and some further information see SistersTours/2000/08/19.

An audience recording of The Sisters' show does exist and is in circulation among the fanbase, see also Doomsday Festival 2000.