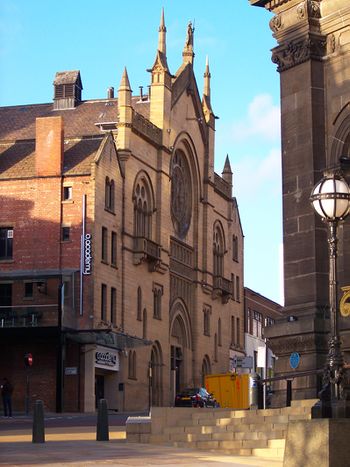 "Off The Street", Town And Country Club, Leeds, UK


for their song "New Gold Dream", after which they did Gimme Shelter together.

Later in the year, a Thank You CD and LP was published including songs from all participating acts and


other bands, who supported the cause. The Sisters' contribution to this release was, however, not the


Eldritch live performance of New Gold Dream and Gimme Shelter with the Utah Saints, but the tracks


Sandstorm / Untitled, most likely the version from The Sisters' Dominion CD-single.

T-shirts for the benefit event were also sold at the gig, featuring the names of the participating bands,


see the pictures down below, underneath which you can also find a few photos of Eldritch's appearance


with the Utah Saints as well as some further pictures featuring Cud, The Mission and a few backstage


were the Utah Saints with Andrew Eldritch joining them, Cud, The Mission, Red Lorry Yellow Lorry,


The Utah Saints' performance (and probably more of this event) was recorded from the audience. The quality of these recordings seems debatable, though.


If you want to find out more about them, check the according thread at the Heartland Forums...

A Few Photos From The Gig

Our thanks for all the photos from the event go to David Whytworth, who first supplied the original prints for use in The Sisters of Mercy's very own fanzine


Underneath The Rock (UTR) Issue VIII, pages 18 and 19 under the pen name Samuel Barnsdore. Check out his website and you might find more great treasures ...


A few pictures from backstage